Rakshdar (Dwarvish, lit. “people of the cat”), called Rakshasa in the common tongue (from the Elvish for “protector”), are the children of the wanderer Kupriel (Venus), an embodiment of love, pleasure, and affection. The Eye of the Cosmos states that the sphere of Kupriel is the divine source of “Desire, with voluptuous Joy and Laughter,” while The Precepts of Usil attribute to that sphere the “desire and longing that characterizes finite existence.”

Rakshasa have an acute sense of smell, and their mastery of aromatics and use of “telepathy” have led other races to accuse them of speaking the language of demons. Magically, they favor spells that influence the minds of their opponents and conjure otherworldy allies.

Their homeland of Rakshasthan is a semi-tropical land of alternating deep forest and sandy plains. The mighty Skhadwend, the Shadow River, culminates in the delta known as the Shadelands. Here, on the edge of the sea, is the great city Reval, Rakshasthan’s commercial port to the Human and Gnomish lands to the west. Outsiders are welcome in Reval, but have seldom ventured beyond. Some say that the giant stone sphinxes of Reval whisper the secrets of the interior, but no outsiders have ever visited Rakshasthan proper and returned to tell the tale. 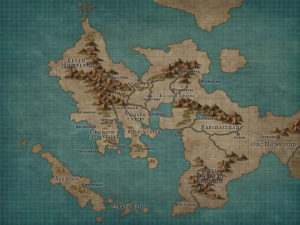 The capital city of Leodashan is inaccessible to outsiders. Despite their isolation as a nation-state, many Rakshasa are seen wandering the lands of others. They are not so ubiquitous in Human lands as Gnomes, nor even so common as Dwarves, but they are a much more common sight in cities than Orcs and Elves. Human prejudice tends to regard Rakshasa as larcenous, if not outrightly demonic.

The native language of the Rakshasa is Elvish (arguably the first spoken language, but one that lacks a system of writing) and they are able to communicate “telepathically” (using a complex system of scents and body language) with other Rakshasa. The also speak and write Common. Merchants among the Rakshasa will often learn Dwarvish, the language of commerce used by the great Gnomish trading states. Few Rakshasa other than specialist scholars ever learn the language (or rather, the corrupted Elvish dialect) of the Orcs.

Rakshasa reach adulthood around the age of 30 and often live to be around 300 years old.

Rakshasa in the greater known world are almost universally mistrusted. It is assumed that they are all liars, just as all Nishaçara are thought to be killers. Some Rakshasa possess the ability to take on the forms of other races, a type of “illusion” that may be based on influencing the minds of others rather than on changing one’s outward appearance. This requires a great amount of concentration, however, so many Rakshasa don’t bother, choosing to tolerate the disdain others feel for them.

Rakshasa are great keepers of bees, and their mead is exported worldwide. They are also lovers of games of chance, and have innovated a number of card and dice games played throughout the world.

Rakshasa are seen primarily to be goddess worshippers. They possess, in fact, an entire pantheon of gods and goddesses, but only a few are well known outside of Rakshasthan. Expatriate theologians have written that such goddesses as Phreira, Kubali, and Taelixi are all aspects of the same terrible feminine power, while others point to the existence of separate priesthoods as evidence that they should not be conflated. The priests of Kubali, Goddess of the Lion and the Bee, are famous for the self-castration they undergo when they devote their lives to their one true love.

Prior to the current age of dominance by the Human Imperium, but after the famous age of great Gnomish mercantile city-states, some conspiracy-minded “historians” have posited an era of Rakshasa dominance. The so-called “Rakshasa Cryptocracy” exercised power over the hearts and minds of their Azyrian neighbors, corrupting the masses to indulge in sexual profligacy and spiritual excess. A much more likely explanation for the moral degeneracy of these times was that the Eldar races naturally devolved to become slaves to the flesh before the great liberator Usil came to save them from their errant ways a millennium ago.

2 Responses to Homebrew Races for 5e DnD: The Rakshasa